Nine seminarians were instituted into the Ministry of Reader on March 31 at Saint Vincent Archabbey Basilica by Most Rev. Lawrence Persico, Bishop of Erie. They are from the Dioceses of Altoona-Johnstown, Covington and Erie, as well as from Saint Vincent Archabbey and Beijing, China. Those instituted as lector can proclaim the readings at liturgy.

David E. Carter of Parkville, Maryland, is the son of the late Kenneth and Shirley Carter. He is a 1972 graduate of Baltimore Polytechnic Institute. He received a bachelor of science degree in history from Towson State University, Towson, Maryland, in 1976, and studied education at Loyola University, Maryland, from 1987 to 1991. He did additional graduate work at Saint Mary’s Seminary and University from 2001 to 2007.
David A. Whiteford of Waterford is the son of Gerald and Susan Whiteford of Waterford. He is a 2009 graduate of Collegiate Academy, Erie. He earned a bachelor of arts degree in history from Gannon University, Erie, in 2013.

Britton Clark Hennessey is the son of Matthew and Janet Hennessey of Augusta, Kentucky. He graduated from Augusta High School in Kentucky in 2000, and earned a bachelor of business administration degree with an emphasis in business information systems from Morehead State University, Kentucky, in 2004.
Joseph C. Shelton of Union, Kentucky, is the son of Kennth J. and Theresa K. Shelton of Union. He is a 2008 graduate of Ryle High School. He earned a bachelor of arts degree in political science from Truman State University, Kirksville, Missouri, in 2012.

A complete album of photos of the event is available at this weblink. 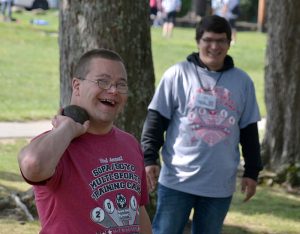