The 52nd annual Red Mass, which is co-sponsored by the Diocese of Greensburg and Saint Vincent Archabbey, College and Seminary, will take place at noon Friday, October 8 at the Archabbey Basilica. Speaker Paul, “Mickey” Pohl, Esq., of the Pittsburgh firm JonesDay®, has more than 40 years of trial and appellate experience. His practice includes product liability, toxic tort, antitrust, corporate governance, telecommunications, natural resources, and health care matters. He has also represented dioceses, colleges, and religious orders.

Rev. Raymond C. O’Brien, professor emeritus, The Columbus School of Law, Catholic University of America. and a priest of the Archdiocese of Washington, D.C., will be the homilist for the Mass.

Attorney Pohl was born and raised in 1948 in Erie, Pennsylvania. He served in the Marines from 1970 to 1972. He joined Jones Day’s Cleveland office in 1976. In 1989, he moved to Pittsburgh to open the firm’s office in Western Pennsylvania. He frequently lectures on leadership and ethics to Marines at the Enlisted Professional Military Education course at Quantico, Virginia. He was chairman of the U.S. Open golf championship at Oakmont Country Club in 2007.

For more than 40 years, Pohl has had extensive trial and appellate experience. He has tried a wide variety of jury and non-jury cases across the United States and has argued numerous appeals in state and federal courts. Pohl has counseled clients on U.S. Litigation issues in Europe, South America, Asia, the Caribbean, and the Middle East. His practice includes product liability, toxic tort, antitrust, corporate governance, telecommunications, natural resources and health care matters. He is one of few lawyers who has tried massive public nuisance cases.

He is a life member of the American Law Institute, where he has taught trial advocacy, and he is a fellow of the American College of Trial Lawyers. He has also chaired the Lawyer’s Advisory Committee of the U.S. Court of Appeals for the Third Circuit and has served as chairman of the Board of the Rand Corporation’s Institute for Civil Justice. Pohl is listed in The Best Lawyers in America in four categories, and Pennsylvania Super Lawyers has listed him as the “Best Lawyer” in “Bet-The-Company” litigation. In 2017, the Legal 500 publication named Pohl to its inaugural “Hall of Fame” for his litigation successes. 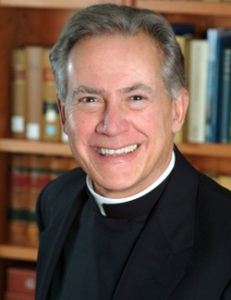 Father O’Brien earned a doctor of ministry degree and a masters in church administration from CUA, and a bachelor of arts degree from La Salle University, Philadelphia. His juris doctor degree is from The School of Law, The University of Virginia, Charlottesville.

Before becoming professor of law emeritus at CUA, where he continues teaching a course each spring, he served as associate professor of law there, and was assistant dean for admissions and student affairs at the school of law. He has also served as a visiting professor of law at The Georgetown University Law Center, Washington, D.C., and has taught at other notable law schools as well. He was a captain in the United States Army, teaching classified materials at the main Army installation concerned with electronic warfare and intelligence gathering.

He is a member of the Virginia State Bar, the District of Columbia Bar, and the American Bar Association. He received the Charles Fahy Distinguished Adjunct Professor Award from Georgetown University Law Center in 2020, and has a United States Army Meritorious Service Medal.

Given the evolving situation concerning the COVID-19 pandemic and recently surfaced variants, all visitors to Saint Vincent College, Archabbey, and Seminary are required to wear a mask while indoors regardless of vaccination status.

‘Always Forward’ Brings History Up To 2020